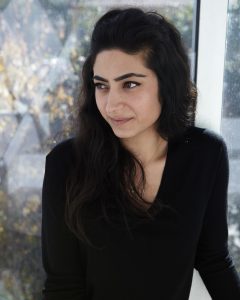 Samira Yamin is a visual artist based in Los Angeles, CA. She is best known for her media constructions of a nebulous Middle East as a place of perpetual war, critique of representation and photojournalism, with an emphasis on the relationship between ethical care and viewership.  Yamin received a B.A. in Studio Art and a B.A. in Sociology in 2006 from the University of California, Los Angeles, and her M.F.A in Studio Art in 2011 from the University of California, Irvine. Yamin has been included in solo and two-person exhibitions nationally in galleries such as the Los Angeles Municipal Art Gallery in 2020 and the Santa Monica Museum of Art in 2013. Most recently, Yamin’s solo exhibition, All Skies Over Syria, was on view in 2021 at Patron Gallery in Chicago, Illinois. Since 2006, Yamin has participated in numerous group exhibitions at galleries such as Fellows of Contemporary Art in 2021, Art Salon Chinatown in 2019, and Human Resources in 2016. Yamin’s artist residencies have included fellowships at the Penumbra Foundation (2019), the Robert Rauschenberg Foundation (2014, 2017), and Headlands Center for the Arts (2012). Yamin is a 2016 recipient of a Joan Mitchell Foundation Grant. Yamin’s work has been widely reviewed in such publications as SFWeekly, The Metropolitan, Hyperallergic.com, ArtForum.com, the Los Angeles Times, and The Washington Post.